Who designed the designer? 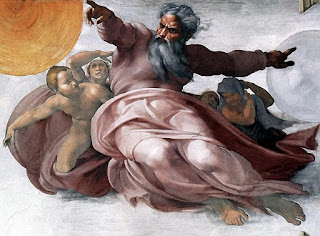 A common objection to the Judaeo-Christian view that God created the universe involves pointing out that if you explain something by appealing to God you have not really explained anything because you would then need to explain God. Richard Dawkins has often written on this topic and his position is essentially this: by explaining an event or an object through reference to God (or, more generally, a designer), the explanation becomes worthless because you have invoked something that itself would need to be explained. The question would then need to be asked, who designed the designer? It would be much better to have a simpler, natural cause that would not require further explanation.

At first this sounds about right; indeed, walking around explaining everything by saying "God did it" would be about the same as not having any explanation at all. But upon closer inspection the argument breaks down completely.

After all, every explanation requires further explanations. Imagine a simple dialogue between a scientist and a curious inquirer:

This line of questioning could go on and on no matter what answer the scientist gives. Either the scientist would have to explain one answer in terms of another, further, explanation or at some point the scientist would have to argue that one particular, arbitrary answer was somehow final. This illustrates two main problems with Dawkins' argument. First, just because an answer may require further explanation does not mean that the answer is worthless. No one would, after hearing it explained that the Earth's gravity pulled the apple to the ground, exclaim, "you haven't explained anything, because now you have to explain where the Earth came from!"

Second, an infinite regress of causes or explanations, as philosophers have called it, is an age old problem with explanations in general, not just explanations involving God. People of all worldviews have to take something as fundamental and not requiring further explanation. Aristotle had his Unmoved Mover, Christians have God, and some scientists believe the laws of nature to be "brute facts" not requiring explanation (Neil deGrasse Tyson begins a chapter of one his books with: "In the beginning, there was physics.") It is silly to single out one specific explanation with a criticism that applies to all types of explanations.

So what can we learn from this? My suggestion would be for Dawkins to stick to zoology and maybe stop writing publicly in areas that are so clearly outside his expertise.
Posted by Unknown at 3:38 PM

Correct me if I'm wrong, but it seems like Dawkins tries to create a playing field in which he is assured victory. I'm sure we all try to do that to a certain degree, but he has essentially decided that certain constructions are "out of bounds" when applied to certain topics, with your point being that his applications are basically arbitrary.

i'm with dawkins on this one...

Mike...what am I going to do with you...just kidding. Let's say that a forensic scientist concludes that your friend was murdered by one Sigmund Lichtenstein. Would you then say, "Your explanation of my friend's murder is meaningless! Now you have to explain Lichtenstein!"

oh man if it wasn't for my head cold i'd have something witty to say.
but i am very proud to be an atheist. when it comes to who made the universe, i say who cares. there is no way to know whether one group is right or wrong, or if there is or isn't gods out there. but we should just try to live in a way that expresses friendship and cooperation instead of fighting over pointless abstract ideas.
As a former psych worker though, I would not be able to understand the murder until I understand "Lichtenstein", his/her motives, actions, thoughts, behavioral stimuli that may have contributed to the actions.
to understand the murder you have to understand the variables that caused it.
then i'd kick him in the nads (if Lichtenstein is a her,i'd have to um...okay i've got nothing.)

Haha...I agree that you'd want to know the motives etc of Lichtenstein, but those would be the next questions to ask after evidence establishes that Lichtenstein was the murderer. The fact that there are more things to learn does not negate the first learned fact...that the evidence indicates Lichtenstein.

I certainly did not mean to attack atheism, just a specific assertion by Dawkins. And I agree that it is sad how hateful some Christians and atheists can be towards each other over, you're right, stuff that we will probably never be able to know with certainty. But I think that was part of the intent of my post: scientists and religious people alike cannot be certain of their own assertions. Dawkins, it seems to me, is trying to single out religious people's beliefs as obviously wrong or stupid (just look at his book "The God Delusion" or TV programs where religion is "The Root of All Evil.")

i think it is less that religion is wrong and more or less its a stupid thing.
now im not calling a person's personal faith stupid (although i have met people with some pretty whacked out ideas); but religion on a whole to me is a waste filled thing, full of manipulation and hypocritical behaviors.
my grand father's generation were not considered white until the 60's due to being Roman Catholic Irish; in the town of Maynard, Ma when he was a kid any one of RC faith were not allowed to cross the train track line because of Protestant fear.
Today my father when working on home loans on Cape Cod will get asked to confirm if a lender is a Mc or a Mac because the borrower doesn't want to associated with "lesser" people.
None of this makes sense.
But faith isn't supposed to make sense to anyone else but to the individual self.
Dawkins faith is that religious belief's are wrong and stupid, and it is a fine line between "religion" and "faith" when it comes to "belief's" but that is what he believes; and he is no different from the Dali Llama(sp), the Pope, or any other religious political figure when it comes to selling books to get his faith out there, and like those people he is not trying to hurt anyone but open their eyes to his perceived reality.