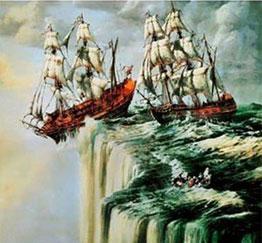 One of the great modern day myths surrounding science and religion involves Christopher Columbus and a flat Earth. Most of us were taught in school that Columbus wanted to travel the world despite all the dire warnings about falling off the edge of a flat Earth. He bravely set sail anyway and changed the world through his discoveries, or so the story goes. Many of us were taught in school that throughout the early and late Middle Ages most people thought that the world was flat. In addition, we are told that this state of affairs was the result of the oppressive religious authorities of the time.
The truth, however, is that the West has known the Earth was a sphere since at least the 4th century B.C., when Greek philosophers like Pythagoras followed by Aristotle and Ptolemy all laid out arguments for a spherical Earth (a few, like Eratosthenes, even took a shot at calculating its circumference). This knowledge survived into the Middle Ages, and virtually all educated people and scholars still affirmed a round Earth. Columbus and company all believed the Earth was round; no one warned him about falling off any edge. He was warned about his faulty calculations, which led him to believe that the Earth was much smaller, and India much closer, than it really was. As we all know, he ended up in North America instead.
So how did we end up believing this fable about Columbus and the rest of Medieval Europe? Historians have traced this flat Earth myth to the 19th century. One of the first appearances was in the early 19th century in Washington Irving’s fictional account of the Columbus story, and sometimes Irving is given most of the credit for the flat Earth myth. However, recent scholarship shows that the myth became a staple in textbooks in the late 19th century after the publication of two books by John Draper and Andrew White. These men were overzealous secularists who wrote distorted (but highly influential) histories of science. Their intent was to provide a narrative involving science and religion where science is struggling for truth and progress and religion is doing its best to hamper scientific advances. The flat Earth myth was one pillar in their overall thesis: religious superstition is always trying to snuff out scientific progress.
How exactly did Draper and White convince us that Medieval peoples believed in a flat Earth? They found two minor figures (no others have been found), Lactantius (245-325 A.D.),  a North African writer, and Cosmas Indicopleustes (fl. 540 A.D.), a Christian merchant from Europe, that wrote in support of a flat Earth and made this minority opinion appear to be the norm from the Dark Ages and onward. In fact, from the patristic period to the late Middle Ages (i.e. whenever you look), all church scholars, ranging from the Venerable Bede to Augustine to Aquinas, affirmed a spherical Earth.
Historians of science have dismissed Draper and White’s books as sloppy, selective scholarship that ignores the bulk of the historical data. Unfortunately, the myth persists. When I was teaching, I would ask my students each year if they had been taught the Columbus myth, and each year at least half of the hands were raised (I suspect most of the rest had also been taught it, but had forgotten). This is kind of sad. Here we are in the 21st century believing that people in the Dark and Middle Ages were fooled by religious authorities into believing in a flat Earth, when in fact we are the ones clinging to a discredited myth.
Further Reading:
Stephen J. Gould's essays Dinosaur in a Haystack
Science & Religion: A Historical Introduction
Inventing the Flat Earth
Posted by Unknown at 8:39 PM

the myth may stem from nordic belief which believed the earth was a disk and the midgard serpent wrapped itself around it, etc.

i have actually talked to people who still say the world is flat, and that science is a lie.

i have also heard of people who believe there is a world within our own...

i really have no point to any of this. heh.
~bairdduvessa

Isn't it sad how easily myths are perpetuated without anyone checking where they came from? I encounter the same thing in my reading on American Christianity all the time.

Barbara Tuckman in A Distant Mirror does a great job of dispelling a lot of the myths about the "dark ages" of the medieval period. They were not this dark, illiterate time that we were told they were and she traces this myth to the writers of the Enlightenment who wanted to make themselves appear as the rebirth of the Romans and the final age of mankind.

It is sad indeed; it's too hard to research things and actually check whether received knowledge is valid. In college a friend of mine was talking to someone about something deep and she had to stop him in the middle of the conversation: "wait, this isn't going to make me have to think, is it? 'Cuz I don't want to have to think."