I Liked the Old Atheists Better 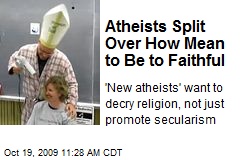 Stephen Prothero, a scholar of religion at BU, recently wrote a book titled God Is Not One. It is mostly an interesting read and is essentially a brief tour of major world religions with the intent of highlighting their differences. He includes a chapter on atheism which, while not a religion, is nonetheless an important and influential worldview (some contemporary forms of atheism, however, do seem very much like a religion).

Atheism is not new. It has been a significant intellectual viewpoint since at least the ancient Greeks, though atheists have always been in the minority. Prothero points out that some of greatest intellectuals (e.g. Nietzsche, Marx, Sartre) as well as some of the worst dictators (Stalin, Mao Zedong, Pol Pot) have been atheists. The so called "New Atheists" (e.g. Dawkins, Hitchens, Harris) have given a new public face to atheism and have written some of the best-selling books of the past decade. Prothero observes that this particular group of atheists seems to be very religious, holding their beliefs "with the conviction of zealots and evangelizing with verve." Chris Hedges, a former writer for the New York Times, sees the New Atheists as a "secular version of the Religious Right." These self-proclaimed freethinkers end up being just as hate-filled, bigoted, and dogmatic as the religious fundamentalists they usually take aim at.

Prothero writes, "One of history's most dangerous games begins with dividing the world into the good guys and the bad guys and ends with using any means necessary to take the villains out. New Atheists play this game with brio, demonizing Muslims, denouncing Christians and Jews as dupes, and baptizing their fellow "brights" into their own communion of smarter-than-thou saints. Like fundamentalists and cowboys, they live in a Manichean world in which the forces of light are engaged in a great apocalyptic battle against the forces of darkness. They, too, are dogmatic and uncurious and every bit as useful to neoconservative policymakers as right wing televangelists."

Prothero asks why we can't recognize that we can just as easily kill in the name of progress (the French Revolution and the brutal dictatorships of Stalin and Lenin come to mind) as in the name of God. Sam Harris actually writes, "Some propositions are so dangerous that it may even be ethical to kill people for believing them." The problem here is the strange but seemingly attractive notion that it is OK to be ultra-dogmatic and aggressive as long as you are "right." To me, the Spanish Inquisition would still not be acceptable even if the Roman Catholic Church's dogma was correct and the heretics indeed held false beliefs.

Prothero also mentions an interesting tidbit about the French New Atheist Michel Onfray. Onfray accuses fellow atheists like Dawkins and Dennett of being "Christian atheists." In other words, these atheists embrace Western moral values (which are predominantly Judeo-Christian) while rejecting Christianity and Judaism. Onfray, to my mind, is a bit more honest when he follows Nietzsche and insists that if atheism is true then there is no need for man to follow conventional morality. Onfray too recognizes the religiosity of many of today's atheists, writing (quoted by Prothero):

"The tactics of some secular figures seem contaminated by the enemy's ideology: many militants in the secular cause look astonishingly like clergy. Worse: like caricatures of clergy. Unfortunately, contemporary freethinking often carries a waft of incense; it sprinkles itself shamelessly with holy water."

Prothero doesn't only discuss St. Dawkins and St. Hitchens, though. He also tells the story of Amanda Gulledge, an "Alabama mom" and an atheist whose children have been shunned by other neighborhood children because they "haven't accepted Jesus as their Savior." Gulledge spoke at an atheist conference Prothero attended, and he noted the sharp contrast between the apparent goals of the more public New Atheists and "normal" atheists like her. One group wants to eradicate religion from the planet and the other wants atheism to be considered a valid viewpoint "deserving of a fair hearing." Prothero further contrasts the two different approaches in terms of the gay rights movement: "One is like trying to turn everyone gay and the other is like trying to secure equal rights for homosexuals."

I appreciate Amanda Gulledge's story, and I am ashamed that Christians would treat children like they have treated Amanda's children. I find it much harder to appreciate what the New Atheists seem to bring to the table: angry, overblown rhetoric and an astonishing level of close-minded, self-righteous hubris. I like how Prothero closes his chapter:

"I wouldn't walk around the block to hear Christopher Hitchens take cheap shots at Christians. But I'd get on the subway, and maybe even a plane, to hear Amanda Gulledge tell me why her kids are good people too."

the past few months we've had a religious nut living here. Needless to say he and i don't get along...especially since he's a fox news republican and im a social anarchistic atheist.
the problem with debating atheism, is that th epoint of view of the others can interpret logic with bating, with statements with preaching.
...the more rigid he gets, the more rigid I get. when i use his tactics against him i come off as an asshole.
i think some of those people too are caught in the same traps, that they have become so tired of explaining our point of views easily; we become so tired that we end up acting just as stupid as the preachers on the other side.
I do believe the world would be a better place with out the Abrahamic Faiths, or most of the other ones.
But yes, I believe we can live easily with each other without the doctrine of some man/men who died thousands of years before us.
But there are some things we can happily take from them as well.
We cannot deny that there have been pluses to society through religion and rules, but I do think it is time for a fade out of them.
Keep the faith, lose the words of others.
We are a growing populace, there will be more philosophical battles coming between the various groups, and the more one side pushes more the weak on the other side will push back too.

It seems that every religion and perspective has a fundamentalist camp of some sort. Sadly enough, the best way to get noticed is to write something sensational, to fight for a narrow perspective, and to shun reasonable discussion.

Thanks for your comment, Mike. First, I'd like to make sure we separate out Christianity from republicanism (especially fox news republicanism) as I believe they have almost nothing to do with one another (despite what they might think). I am happy to be part of a church community that is almost entirely non-political (we have a variety of political opinions, though mostly liberal leaning, but we realize that Jesus was not a republican or a democrat). I would probably be just as annoyed as you.

To my mind, politics are actually the source of many sins committed in the name of religion. The Roman Catholic Church in the Middle Ages, for example, was a political body as much as it was a religious one and became corrupt. The religious right has tied their own politics to Christianity, with disastrous results. The dispute between Irish catholics and protestants seems to me to be a political war draped with religious language and titles but having very little to do with Scripture or seeking God in their lives.

Anyway, I like to think that we would be able to dialogue about things like reasonable people. But hey, not everyone is reasonable. Sorry you have to live with one of them!

Ed, yes, they do seem to have figured out what sort of language and rhetoric will be most likely to land their books on the best-seller lists...

he leaves this week! :D
politics will ruin anything, but by adding variables it ruins more. by adding religion to politics, it is too easy to manipulate those who chose not to think for themselves.
i used for news republican as a way of separating from any other republican or Christian.
I myself an an ex Catholic as you know, and I am friends with many Catholics...most of whom are Lapsed Catholics but Catholics none the less. Northern (U.S.) Catholics are amazingly liberal people within a conservative structure.
While I do agree with your friend Ed, that some of it may just be to sell books, there is a sense of fighting back.
I get told all the time from adults, peers, kids that I am an idiot for being an atheist...after a while you fight back.
One of my favorite hobbies now that I am in the Bible belt is to show the Southern Baptist Holly Rollers where various holidays and practices (that they vehemently yell at me for not celebrating) came from. All the pagan practices, all the various saints that were canonized pagan gods...
It is especially fun to do it to teens. I know part of that is wrong, but I get sick of being yelled at for my world view.
Hell every school day from kindergarten through high school i had to pledge allegiance to a god that i wasn't sure existed because some paranoid men in the 50s (and in the 20s before them) thought they could defeat communism by having americans pledge under god.
It gets tiring.
The only difference is I don't want to preach, I don't want to sell books. I have no interest in using atheism in a political way.
I just want to breathe without being yelled at because I don't thank their god for my breath.
does that make sense?