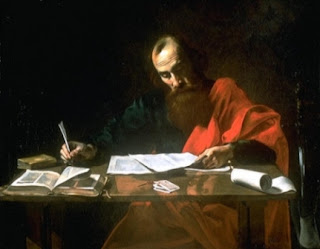 So a while ago I wrote a little bit about God and sex and attempted to clarify what Christianity actually teaches about sex. In that post I mentioned the apostle Paul.

In one of his letters to the Corinthians, Paul writes that it is good for husbands and wives to have sex and says that it is perfectly all right for people to get married if they want to. I see this as a pretty clear endorsement of sex and marriage, but Paul also states that while it is fine and good if people marry, it is better to be celibate. Paul doesn't say this because he thinks sex is bad, but because those with the gift of celibacy (which, Paul writes, only some possess) have more time to devote to God. Still, in my mind this put a bit of a damper on the endorsement.

I'm currently reading The Oxford Illustrated History of Christianity and came across an interesting note. Early Christians varied in their beliefs regarding whether or not they still had to strictly follow Jewish law or if they were free from the law or other social conventions. According to historian Henry Chadwick, "the pagan world was familiar with the widespread belief that sexual contact between man and woman hindered the soul's rise to higher things." This belief was adopted by some groups within the church, and was one of many reasons Paul wrote to them. Paul was not writing to people who thought that sex was good and telling them yes, sex is fine, but refraining from sex is better. He was writing to people who thought that sex was bad and was telling them no, sex is good, even if being celibate is better. Set in this context, Paul's affirmation that marriage is a good and acceptable thing is a stronger statement than I originally thought.
Posted by Unknown at 9:26 PM

Good points Jeff. I find that many of these things also require a more complete reading of scripture. For example, it seems Solomon was all for sex, and the Song of Songs is quite clear as well.

For matters dealing with women in ministry, there's a similar line of reasoning here as well in addition to some helpful stuff in the OT.